Providing of Ukraine’s budgetary system sustainability in conditions of crisis

Abstract. Introduction. Stability of budgetary system, balance and effectiveness of financial and budgetary policy, including the spheres of income and expenses of budget, taxation, inter-budgetary relations, budget deficit and state debt, depend on the efficiency of state financial resources managing and macroeconomic indicators. Purpose. Key component of Ukraine’s budgetary system stability under the present crisis phenomena is the budget-reflected corresponding relations in the gross domestic product re-distributing with the aim to satisfy the needs of the society. Our research is devoted to development the algorithm of Ukraine’s budgetary system stabilization in conditions of crisis phenomena, based at effective management of the state financial resources, balance of financial and budget policy, effectiveness of inter-budget relations and positive results of budget expenses. Methods. The research is based at dialectical and system approaches to the study of budgetary system stabilization theory and practice, as well as methods of comparison, analysis, synthesis and scientific abstraction.

Results. Budgetary system is one of the main instruments for the regulation of social, production, investment, regional and economic activities. Analysis of Ukraine’s budgetary system condition in 2013 proved its dependence on political stability and situation on the world markets of raw materials (oil and gas prices). Such dependence limits effectiveness of the budgetary maneuver, such as increase of income and expenses. Structure of budgetary expenses is not optimal for the economic development stimulating. Global economy had great influence on the budgetary system, decelerating its growth. Development of budgetary policy shall be based at the fact that deceleration of economic growth does not have to decrease the state expenses and further deteriorate the general economic situation. We offer the algorithm of the budgetary system stabilization in conditions of crisis phenomena using methods and instruments of budgetary policy. The important instruments of stabilization are: increase of budgetary expenses effectiveness by means of software-based budgeting methods implementation; balance of tax and monetary policy; stimulation of economic and investment activities; adoption of new legislation concerning financial markets; support of small and medium business by the banking system; effectiveness of local budgets operations; the Provisional Fund support and inter-budgetary relations improvement. Stability of budget system and increase of state finance management effectiveness may be reached by means of the Long-term Budget Strategy developing and adopting in compliance with the Long-term Strategy of the Social and Economic Development of the Country and the main directions of the budgetary policy. Discussion. The important issue to be solved is the problem of the budgetary system openness and transparency, as well as means of budgetary indicators forecasting (income and expenses). These matters are lively discussed by the financial experts. The problem of openness and transparency of the budgetary system remains open and is a subject to discussions.

Conclusion. Budgetary policy shall become more effective instrument for the state social and economic policy realization. The important task is to develop the budgetary strategy for the different variants of the Ukrainian and world economy development. Its efficient solution will permit to achieve the stability of budgetary system in the crisis conditions, as well as macroeconomic stability of the country. 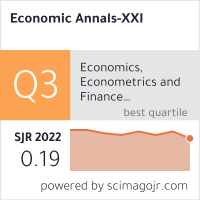